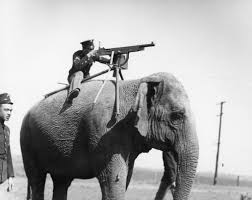 For the animals involved, the First World War was a calamity—a great killing, as it was for the humans and ideals destroyed in the fighting of 1914 through 1918. Sixteen million animals served in the Great War, not to mention the uncounted millions served up as daily rations to the armies.

The centennial of the war has been well commemorated, concluding with the November 11 Armistice Day ceremonies. I thought we could now think of the animals who were conscripted to the various fronts. 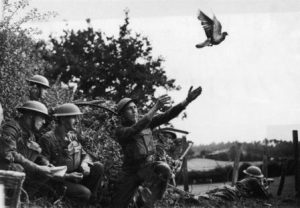 Horses, dogs, pigeons, mules, camels, elephants, cats, and other creatures large and small were at the front—an astounding array there to serve the war effort. Transport, communications, companionship, medical assistance, combat assistance were among the animals’ duties. Horses, donkeys, mules, and camels carried food, water, ammunition, and medical supplies to the front; dogs and pigeons carried messages. The homing pigeons were natural messengers. Swooping in at 40 mph, the 100,000 of them used by the British delivered messages at a 95% success rate. Canaries, mice, and slugs detected poisonous gas, and cats and dogs hunted rodents in the trenches. Cats, dogs, monkeys, bears, foxes, and lions were kept for friendship amidst the hardships of the war. 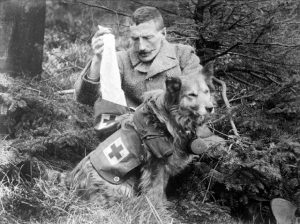 Much of this was dangerous work, and animals suffered terrible casualties in the fighting, as well as in the artillery exchanges that produced the daily killing of soldiers, referred to as “wastage.”

One million dogs were killed. They performed hazardous search and rescue operations, carried medical supplies to the front and into no man’s land. Casualty Dogs took first-aid supplies to wounded soldiers, and Mercy Dogs stayed with mortally wounded men and gave comfort to them as they died. 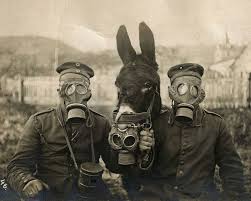 Eight million horses and countless mules and donkeys died in the fighting or bringing supplies from the rear. In one day alone at Verdun, 7,000 horses died, before the armies realized the futility of cavalry charges. Many horses and mules died of illness, exhaustion, or hunger. Two and a half million horses were treated in veterinary hospitals; two million were cured and sent back to duty. In the worldwide requisitioning of horses, 1,000 “half-wild” horses from the North American plains were shipped every week to the Allied armies. “[Horses and mules] were central to the war effort. Without them it’s likely victory would not have been secured. It would have been impossible to keep the front lines supplied,” according to the British Library. 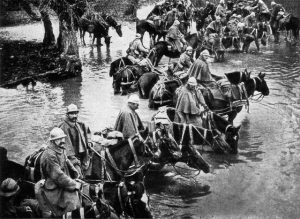 Along with the red poppy and the doughboy, the horse is an iconic image of the First World War. Their sacrifice deserves our compassion. The story War Horse exemplifies the fate of horses caught in the industrialized slaughter. The suffering of horses also showed the humanity of soldiers struggling in the same chaos. Memoirs often mention their distress at hearing the sounds of horses who had been hit by artillery. It pained many of them more than they could bear. The German protagonist in the novel All Quiet on the Western Front says, “it is the vilest baseness to use horses in the war…soldiers can bear almost anything but this is unendurable. It is the moaning of the world, it is the martyred creation, wild with anguish, filled with terror, and groaning.” 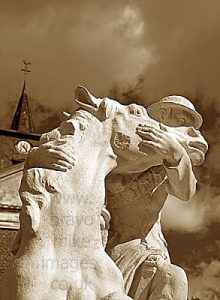 There is a memorial near the Somme battlefield of a soldier and his wounded horse. This passage from the book The Missing of the Somme describes the statue and the feelings that soldiers had for their animals: “The horse’s legs have collapsed, its eyes are rolling in panic. The soldier has one arm around the horse’s neck; with the other he strokes its jaw, using his forearm to support its thrashing head. It takes all the soldier’s strength to comfort the wounded horse but his lips touch its face as tenderly as a lover’s.” A new memorial in Britain, the War Horse Memorial, honors the millions of British, Allied, and Commonwealth horses, donkeys, and mules lost on the war’s battlefields. The purple poppy signifies the contribution of the animals. 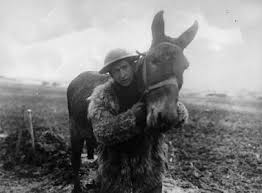 The First World War, with its dependence on horse power, looks antique to us now. Later wars, more technologically advanced, would also use horses. In its invasion of the Soviet Union in 1941, the German Army was 80% horse drawn.

A wider representation of the suffering in the First World War has surfaced in recent years. Books and exhibits document the participation of the colonies of the European empires in the world war, and the sacrifices of soldiers of color. It seems right to think of all our fellows and fellow creatures who were caught in that immense struggle a century ago.

Sources: The Great War and Modern Memory; The Missing of the Somme; New York Review of Books (November 14, 2018); The Mirror (July 31, 2014); The Telegraph (November 29, 2018); Animals in War website; Imperial War Museums (January 4, 2018; for the description in paragraph 3 above of animals and their roles); Queensferry History Group website